GENERAL ASSEMBLY Although there wasn’t any legislative action on fish bills this week in Raleigh, I was there to run down a rumor about an attempt to ram a bill through the Senate before the session ended. I couldn’t find any basis for that but we need to be diligent.

They will go back into session on Wednesday, November 13th and not sure when they’ll end it for the year. Also heard that although the “Short Session” should begin in May next year, they’ll be going in January. Keep in mind North Carolina is supposed to be a citizen legislature, meaning part-time. Sure it is!

The Atlantic States Marine Fisheries Commission held its Annual Meeting this week in New Hampshire. One of the actions they took was a vote to deem Virginia out of compliance for the menhaden fishery. It’s a very interesting situation but I’ll have more on that next week.

BEACH SEINE FISHERY A video posted on social media this week got a lot of attention and was circulated to all members of the North Carolina General Assembly. I’m working on it and will address it with all legislators, but it was a legitimate video and although it was a legal operation and no conservation laws were violated, a Dare County fisherman will be charged for not cleaning up his operation by the National Park Service.

INTRODUCTORY NC MARINE FISHERIES MANAGEMENT FOR FISHERMEN.  CLICK ON THE PHOTO BELOW FOR DETAILS 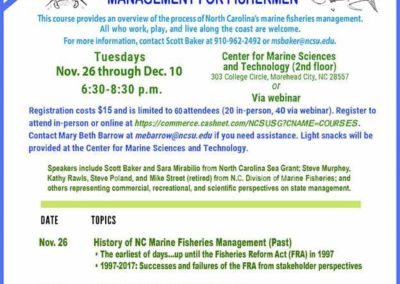