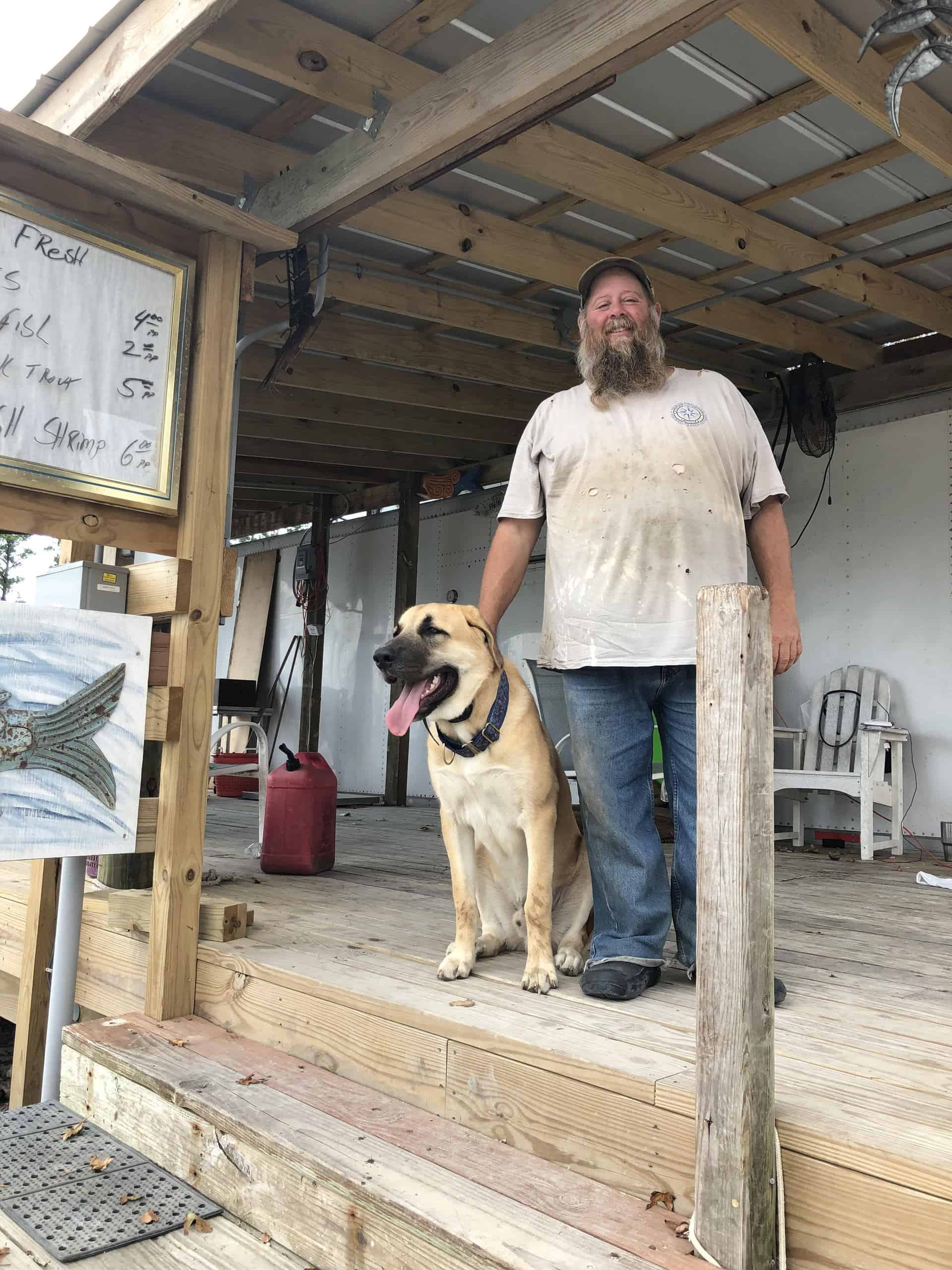 Keith Bruno of Oriental, North Carolina has been blown about, battered, shaped, and made wiser by storms. The brawny fisherman from New York moved south because remnants of Hurricane Floyd washed pesticides – sprayed to combat mosquitoes carrying West Nile Virus – into Long Island Sound and killed off all the lobsters.

Having lost his principal fishery, Bruno and his wife decided to make a go of it in North Carolina. They moved onto a tributary of the Neuse River in Pamlico County, geographically-shaped like a catcher’s mitt for storm surges, just in time for Hurricane Isabel.

Bruno launched Endurance Seafood by trying his hand at crabbing. He had a rough start.

“I had a 43-foot boat and went all the way down the sound to set crab pots. A guy out of Hatteras or Ocracoke came over to me in his skiff. He said, ‘You can’t set there!’ Why not? He said, ‘There ain’t no crabs there. Man, you’re wasting your time! I got a line of pots a quarter of a mile from here, set next to me.’”

Bruno was sure he was being set up for failure and ignored the advice. But sure enough, the next day when he pulled his pots, they were empty of crabs.

“Same fisherman came out to me again and said, ‘I told you! Go pull one of mine and see for yourself – that’s where they are.’ I said nope. After three or four times, he didn’t come to me anymore. Finally, I moved my pots to his area, and started making money! He waved and said, ‘Man, I’m glad you finally got it!’ It’s crazy how accepting people here have been of me!”

Bruno and his two young sons fished nets and pots for the next few years, growing the business.  Then came Hurricane Irene in 2011.

“Irene was the worst storm we’d seen ever,” Bruno reflected. “We sat in the house and watched as she pulled the dock slowly apart. Then the cooler started rocking and threw the ice maker into the creek, a very expensive piece of equipment. And then the entire cooler started floating away!”

The next morning, once Irene’s nine-foot storm surge receded, Bruno took in the destruction. “All our crab pots were beat up against buildings, across the street, stuffed in trees, miles away. Gillnets were strewn across the street, thousands of yards of net entangled in branches. We were tore up.”

But that same day people began arriving to give him a hand. More came the next day, and the following day as well.

“The storm is terrible,” Bruno said, shaking his head. “The community after the storm is mind-blowing. People come together for no reason other than to help.”

Bruno was especially moved by the generosity shown to him by his neighboring seafood dealers. He said that George Brown, from Marshallberg, showed up with his crane and set Bruno’s cooler back on its foundation.

“I was of course elated and grateful, but with an uncertain future asked, ‘Can I pay you half now and half later?’ And he said no. I said, ‘Well okay, what’s it going to cost?’ No charge. He told me that Sherrill Styron over here at Garland Fulcher Seafood sent him to help me and said to put it on his bill. Chokes me up to this day.”

Recalling what happened during Irene, the Bruno family moved all their nets, pots, and boats to higher and safer ground in anticipation of Florence. They had converted an old box truck into a cooler with an ice maker on top, hoping to tow it to higher ground for the next storm. But as Florence got closer, he discovered that the box truck was mired deep into the soft ground and wouldn’t budge.

So, Bruno removed the ice maker and hoped for the best.

“We stayed in Arapaho and tried to get back the next morning, but the water was still high,” he explained. “My two sons stripped down and swam down here on a reconnaissance mission. They said, ‘The house is still there, but we can’t find the cooler.’ I said, ‘How can you not see a giant 30-foot white box?’ I was afraid my cooler got swept off the foundation into the marina down the creek, full of yachts – millions of dollars in damage my stuff could have cost other people! But turns out the cooler had been beat to little pieces and swept away.”

Bruno and his family thought long and hard about how to better prepare for the next storm.

“What can we do going forward to make it better? Storms have gotten progressively worse over the years. I liked the mobility idea because it was clear that we can’t keep anything safe. I got the idea of a tractor trailer.”

Bruno bought a 48-foot semi tractor-trailer in New York and had it brought to Oriental.

“It sat in the driveway for two months while we thought about our plan. We have the mobile part, but how do we make it function has a fish house? Went down to Bally Refrigeration in Morehead City and talked about compressors, evaporators, and refrigeration needs. They ran a bunch of calculations, R values, and we measured foam thickness on the side of coolers and so on.”

The Endurance Seafood team came up with an innovative “fish house on wheels” that sits perpendicular to the water, with a roofed loading dock built around it.

“Half of this is a cooler, half is a freezer, and the back half is my ice room,” he explained. “Lots of halves there! Front piece is dry storage – closet for cartons. So, it’s four parts.”

Still, Bruno worried about repeating his earlier mistake of getting mired in the soft mud.