Mike Loeffler netted a southern flounder from a tank and pulled it out of the water where Shelby White and Anne Markwith were waiting with a measuring board.

“First, we’ll get a length on her,” said White, and she called out the length of the fish to a nearby technician recording the data. “Then we’ll insert the first tag.”

White tagged the fish and it was back in the water in nearly a minute.

The three Division of Marine Fisheries biologists placed “dummy” satellite tags in ten southern flounder held in tanks at the University of North Carolina Wilmington’s Center for Marine Sciences in anticipation of an upcoming tagging study in the fall of 2020.

The division received a $392,200 grant from the Commercial Fishing Resource Fund to conduct a satellite tagging study in North Carolina, as well as South Carolina, Georgia, and Florida. The study is designed to estimate offshore spawning habitat and movements for southern flounder, while also determining whether the species matures at different sizes throughout the South Atlantic.

The Commercial Fishing Resource Fund receives money from an increase in various commercial license fees that took effect in 2015. The fund pays for the Observer Program, and any remaining money is available to fund projects that develop and support sustainable commercial fishing in the state, such as the southern flounder satellite tagging study.

Why We Need This Research

Scientists and commercial fishermen have questioned the spawning habitat and migratory patterns of southern flounder for many years.

Scientists can estimate the number of juvenile southern flounder entering inlets and the number of adult fish leaving the estuaries in the fall and winter, but this study aims to answer a larger question about the offshore movements and behavior of the species.

More information on these movements will help scientists better estimate the population and understand where southern flounder are migrating.

“Theoretically, there is a relatively small area where these fish spawn, and if researchers can find that area, they will know where to look to for mature females and have a better idea about spawning success and fecundity,” Loeffler said.

Currently, the southern flounder population is overfished and overfishing is occurring throughout the U.S. South Atlantic. North Carolina has taken the lead on addressing overfishing by implementing harvest reductions for the commercial and recreational fishing industries through season closures, bag limits, and gear restrictions. Although the efforts of North Carolina are substantial, southern flounder move across state boundaries and other states should consider adopting similar measures as a long-term solution.

Answering these questions with the satellite tagging research will help managers better understand appropriate harvest levels and quantify the effects of recent regulation.

What the Research Entails

Beginning in the fall of 2020, division biologists working on the satellite tagging study will contract with pound net fishermen, as well as fishermen using other gears, to collect adult female southern flounder that are near the state’s inlets.

“The goal is to get at least 100 tags out in North Carolina this season,” White said. “And we’re really excited to have participation from the commercial industry, since this is their money and something that is important to them.”

Once staff transfer the fish from the fishermen to the holding tanks onboard a division vessel, only adult females in the best condition will be selected for tagging.

Common tagging practices recommend that the weight of the tag not exceed 2% of the fish weight, so only fish weighing 6 or more pounds (about 20 inches) will be used for the study. Once the fish is tagged, it will be released at the nearest inlet to minimize the chance that it will swim back into the estuary. This is what scientists refer to as “fall back.”

The satellite tags used in this study are pop-up mrPAT (Mark Report Pop-up Archival Transmitting) tags from Wildlife Computers, Inc. These tags are programmed to release from the fish after a pre-determined period. Once the tag is released, it floats to the surface and sends a signal to a satellite. Biologists can download the data to determine where the tag was located, providing an estimate of fish location. The tags will be set to release at various intervals that coincide with the length of the suspected spawning period, which will give biologists an idea about the pre and post-spawning movement of this species.

Division biologists plan to release a total of 200 tags, most in North Carolina during the first year of the study. A subset (about 75 tags) will be released in South Carolina, Georgia, and Florida to capture the movements of southern flounder throughout the South Atlantic.

In November 2018, division staff tagged and released 20 adult, female southern flounder into various inlets. The tags were programmed to release in January and February, but all the tags popped off earlier than scheduled – most within 72 hours. Five tags did provide a longer set of data and showed fish traveling in different directions, furthering the need to understand how southern flounder are behaving and migrating.

It’s likely that the tags released early due to the massive volumes of freshwater entering the inlets from Hurricane Florence. Each tag is constructed with a sensor that is sensitive to water conductivity, or salinity. The large volume of rainfall in 2018 was still leaving the inlets through early 2019 and may have triggered the release process.

The tags used in the upcoming study have been adjusted to prevent this from occurring in the future.

To ensure that the tags will remain on the fish, biologists want to determine what tagging method is best suited for this study. There are numerous tagging methods used in fisheries, but the division is trying two different methods in preliminary tank trials.

“That’s the point of the tank trials, to kind of see how the different attachment methods work,” White said.

The first method is the “spaghetti tag” method. The spaghetti tag may be recognized by some fishermen as the yellow and red reward tags used by the division on a variety of species. With this method, a spaghetti tag is placed near the caudal peduncle, or the narrow part of the fish’s body next to the tail. Another spaghetti tag attaches the satellite tag and is placed towards the mid-upper portion of the fish. The antenna of the tag is tucked under the spaghetti tag near the tail, holding the tag flat against the fish.

The second method is the “anchor” method, where an anchor tag is placed towards the mid-upper portion of the fish and tucked under the spaghetti tag near the caudal peduncle.

In September 2019, staff captured southern flounder from various areas in the Albemarle Sound and transferred them to the Edenton Fish Hatchery. Unfortunately, the fish at the hatchery suffered mortalities due to unknown causes.

Due to future construction at the Edenton Fish Hatchery that would prevent long-term monitoring of tagging success, division staff decided to continue the tank trials at the University of North Carolina at Wilmington’s Center for Marine Sciences. These fish were captured from Core Sound before Thanksgiving and have had tags since early December. Five fish were tagged with the “spaghetti tag” method and five with the “anchor” method. The fish have done exceptionally well, and all tags remain in place to date.

Biologists plan to keep the fish for four to five months, as this is the amount of time that the tags will need to last when they are deployed in the wild.

“We’re just trying to experiment with a way to keep the satellite tag flat against the body,” Loeffler said.

Keeping the tag flat will prevent the flounder from snagging the tag on any structure or making it an obvious target for prey. The goal is to have the fish enter its natural habitat and be as unaffected by the tag as possible.

The tags are attached to the dorsal side of the fish where there are no organs to hit.

“Very little harm is done to the fish,” Loeffler said.

There are two other related research projects underway to estimate spawning locations and post-spawning movements of southern flounder.

Dr. Frederick S. Scharf, Professor in the Department of Biology and Marine Biology at the University of North Carolina Wilmington, is conducting similar research with satellite tagging through a Coastal Recreational Fishing License grant.

This fall, researchers will need the help of a few fishermen with pound net sets or other gears near inlets to provide southern flounder to tag and release. The division will be contacting fishermen, but any pound net fisherman interested in working with the satellite tagging study should contact Shelby White or Michael Loeffler at 252-264-3911.

Only a few pound net fishermen will be needed, but as always, fishermen who would like to participate in conventional tagging efforts can also contact Shelby White or Michael Loeffler for more information. More tagging effort is always appreciated and useful.

Fishermen are not expected to catch southern flounder with satellite tags in the fall due to the location and time of tagging, however, if the fish are captured fishermen are encouraged to call the division and report the tag information.

Shelby B. White is a Temporary Biologist I, working on the southern flounder satellite tagging study.

White was raised in a commercial fishing family and has gill netted and crabbed with her dad on the Albemarle Sound for most of her life. She holds an undergraduate and Master’s degree from UNC Wilmington and is currently working towards a doctorate in fisheries science at the Virginia Institute for Marine Science. Her dissertation focuses on changes in coastal commercial fishing communities, specifically how Virginia’s small-scale fishermen are choosing to participate and diversify within and outside of the commercial fishing industry. Shelby looks forward to interacting and working with commercial fishermen throughout North Carolina on this satellite tagging study.

Loeffler has been with the division since 2000, and he has been the staff lead for perch and catfish, spotted seatrout, and weakfish at various times over the years. He has been the southern flounder species lead since 2015. Loeffler is also the current Atlantic and shortnose sturgeon species lead, as well as the principal investigator for the division’s Multi-Species Tagging Program, which is financed by the Coastal Recreational Fishing License Fund.

Loeffler has been actively tagging fish since the mid-1990s in the Gulf of Mexico and coastal and nearshore waters of North Carolina and Virginia. He has tagged thousands of fish using conventional fish tags, PIT (Passive Integrated Transponder) tags, acoustic tags, and now mrPAT satellite tags. Loeffler is excited to bring satellite tagging methodologies to southern flounder research to help answer long-standing questions about the species.

Markwith has been with the division since 2014, initially working as lead for the snapper-grouper complex before transitioning to species lead for sheepshead and cobia. She has been the southern flounder co-lead since 2018. Markwith is currently working with South Carolina, Georgia, and Florida biologists on a grant for satellite tagging cobia to answer questions about migration, overwintering behavior, and stock structure. She looks forward to using the same satellite tagging technology to help answer similar questions for southern flounder. 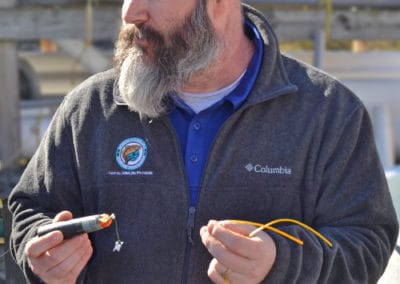 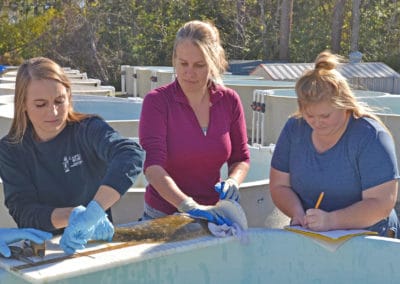 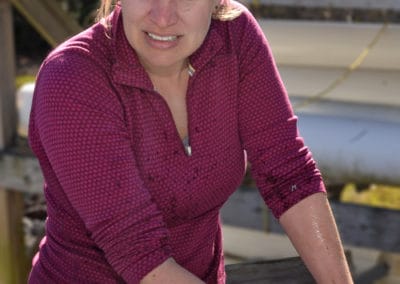 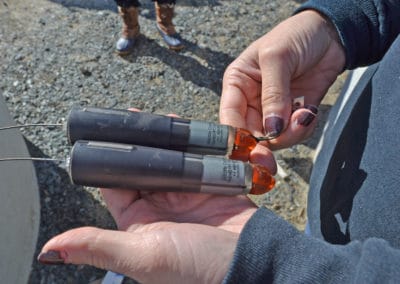 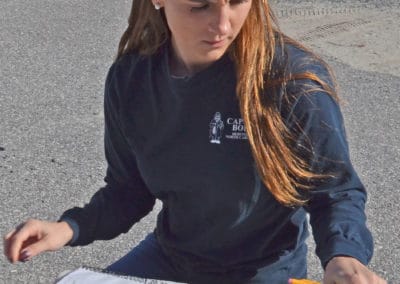 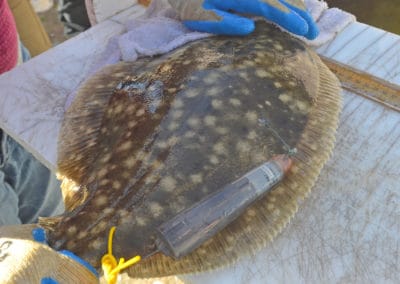 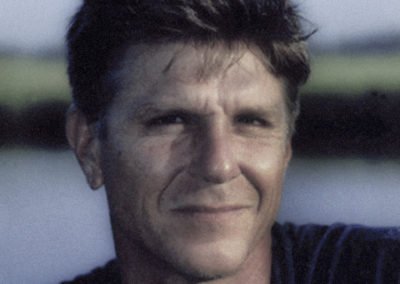 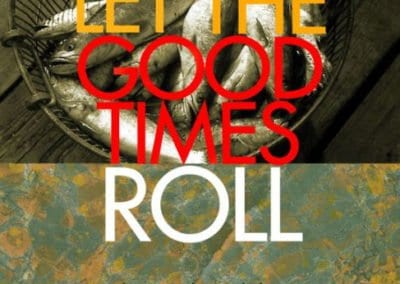 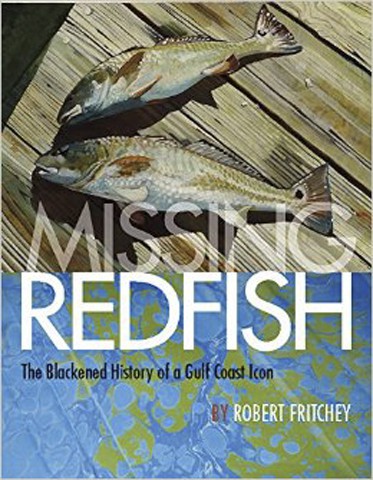 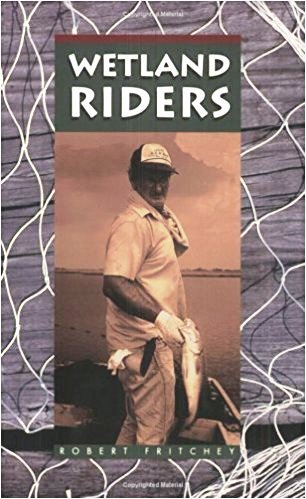 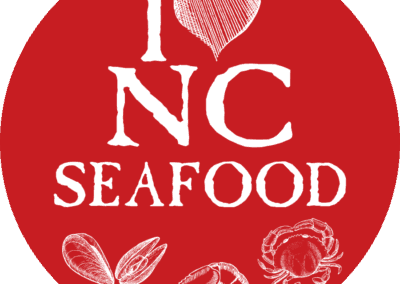