General Assembly: The legislators are not scheduled to return to Raleigh for session until late January. As noted previously, House member and Rules Chairman David Lewis resigned. His replacement has been announced this week and his name is Howard Penny. He will be on the ballot in November as well.

WE NEED YOUR HELP!!

The Southern Shrimp Alliance plans on filing comments in support of FTC’s prosed rule on September 14, 2020, which means we only have a few days to get as many members of the shrimp industry to comment on the FTC’s proposed Made in the USA regulations.

Attached and below you will find a short write-up of what we would be asking members to do in terms of commenting, as well as instructions as to how to comment.

Please contact me ASAP if you have any questions or concerns.

A similar effort by members of the U.S. shrimp industry will help to further establish the importance of enforceable labeling standards for food products.

Please consider submitting a comment in support of the rule.  You can do so up until September 14th by going to this website, https://www.regulations.gov/document?D=FTC-2020-0056-0001, and clicking on the “Comment Now!” on the right-hand of the screen.  You can also reach the comment page directly through this website address:  https://www.regulations.gov/comment?D=FTC-2020-0056-0001

While comments may be submitted anonymously, you may also provide your name and contact information.

The CCA is encouraging recreational anglers to send email comments and make telephone calls to the South Atlantic Fishery Management Council (SAFMC) staff , members along with states representatives urging to ban the harvest of dolphin (The fish not the mammal) with commercial pelagic longline gear which is an authorized gear has been documented being used since 1987

CCA claims that “manipulations by federal fisheries managers continue to encourage development of the directed long line fishery that could have a radically negative impact on the recreational fishery going forward “but their false claims are far more alarming than the actual facts!

The fact is the First Dolphin Fishery Management Plan (FMP) was adopted in 2004 recognizes that Pelagic longline fishery existed in the Atlantic and that in some years accounted for a significant percentage of the commercial dolphin landings from the New England, Mid Atlantic, and South Atlantic regions.

The CCA was quick to point out that commercial dolphin landings exceeded 1 million pounds in 2014 and 2015 claiming this as proof of a developing directed longline fishery, but failed to mention that recreational landings for those same years were 16,641,747 pounds and 25,375,982 pounds respectively.

They also neglected to mention that prior to the adoption of the 2004 FMP commercial landings regularly exceeded 1 million pounds as this would suggest that a directed fishery did in fact exist prior to 2004. While it’s obvious these claims are intentionally misleading the CCA’s assertion that there is a “federal emphasis on commercializing dolphin” is an outright lie!

The SAFMC also implemented a commercial step-down quota which requires a 4000-pound commercial trip limit when 75% of quota is reached.

These accountability measures have been successful at preventing the commercial ACL from being either met or exceeded assuring quota availability thru out the year.

So, as you can see from the graphs without Pelagic Longline Gear harvesting of DOLPHIN Fish American consumers would have very little access to this seasonal fish.

There are however options that could increase the total annual catch limits which in turn would increase both the recreational and commercial ACL’s significantly benefiting both sectors.

In my opinion this option alone explains the CCA’s renewed interest in banning the harvest of dolphin with commercial longline gear. Simply put they know that a ban on longline harvest will prevent commercial fishermen from harvesting their current 10% of the total ACL much less any future increases that may occur.

Current management measures assure that the directed longline fishery will never have the “material, negative impact on the quality and availability of this highly prized sportfish” as the CCA has predicted.

Commercialization of the Atlantic dolphin fishery is impossible under the current Fishery Management Plan.

How greedy do you have to be to have 90% of the dolphin harvest allocation and then lie and scheme attempting to take the other 10%?

Simple ask yourself why would the CCA want to deny Americans citizen access to seasonal Fresh domestic Dolphin fish thru Commercial Fishing if not for Greed? 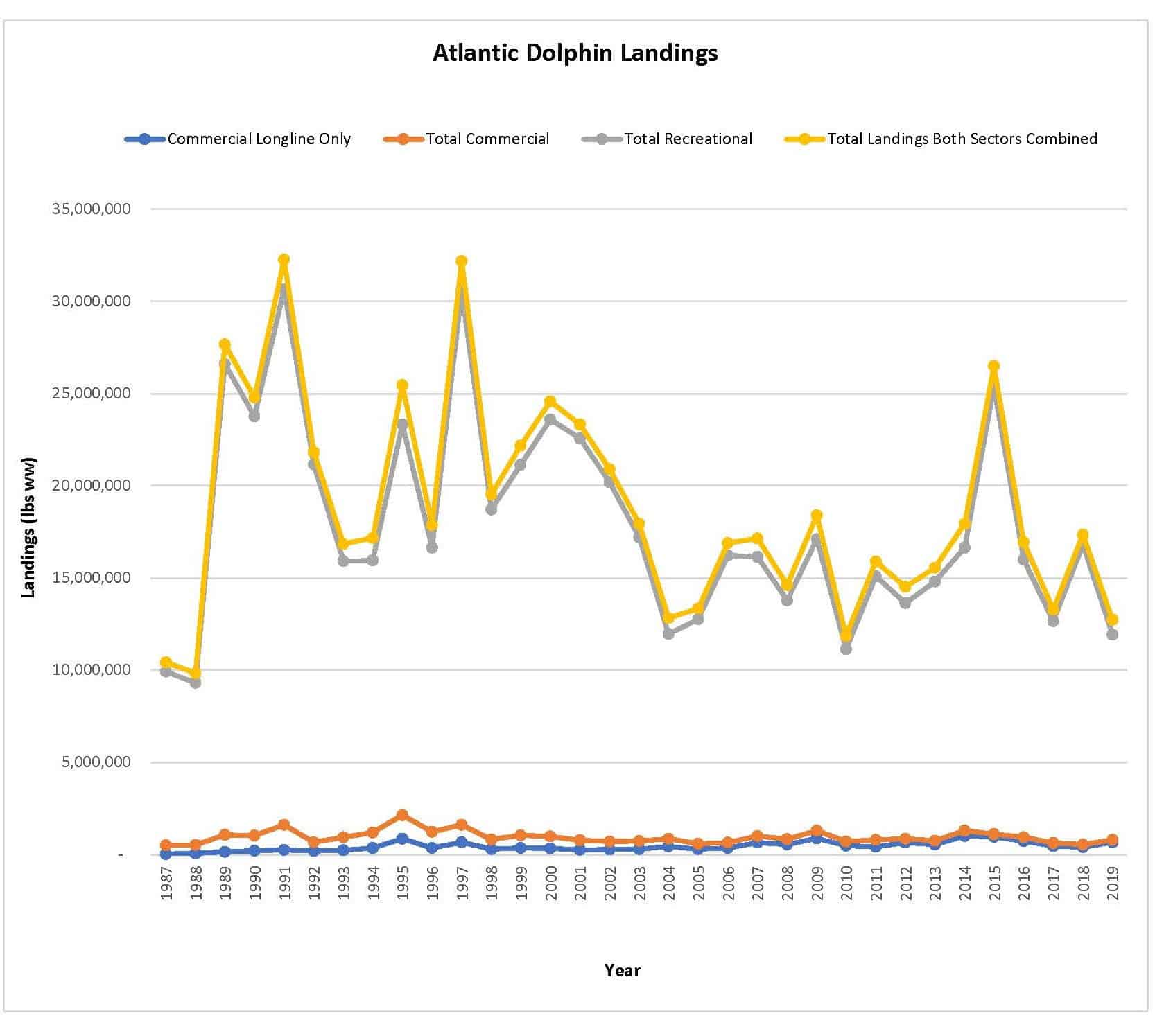 staff will monitor fishery from state boats due to COVID-19

MOREHEAD CITY – The commercial flounder season opens soon, and the N.C. Division of Marine Fisheries is reminding gill net fishermen that one of the conditions for the Estuarine Gill Net Permit (EGNP) is to allow division staff to observe gill net operations.

In response to risks associated with COVID-19, observations will occur at a safe distance from fishermen using division-owned boats. Division staff will continue to contact fishermen to schedule observations and approach fishermen on the water to observe trips.

Refusing to allow an observer to observe a gill net trip will result in revocation of the fisherman’s EGNP.

The EGNP is a critical step in meeting the requirements of the division’s sea turtle and Atlantic sturgeon Incidental Take Permits issued by NOAA Fisheries under Section 10 of the Endangered Species Act. It is required for anyone who sets an anchored gill net (large-mesh or small-mesh) in estuarine waters (commercially or recreationally).

Fishermen convicted of using anchored gill nets in internal coastal waters without holding an EGNP could be subject to a Class A1 misdemeanor.

The commercial southern flounder season opens Sept. 15 in the Northern Management Area, which includes Albemarle, Roanoke, and Croatan sounds and their tributaries and Oct. 1 in other estuarine waters of the state. for specific information on the commercial flounder season in the Northern Management Area, see Proclamation M-14-2020.

The U.S. Department of Agriculture announced on Wednesday, 9 September, it will provide approximately USD 530 million (EUR 445.6 million) to seafood harvesters in the United States to compensate them for losses caused by retaliatory tariffs.

Up to USD 250,000 (EUR 209,967) will be made available to individual fishermen or businesses whose primary function is harvesting seafood and who have been harmed by tariffs imposed by foreign nations. The funding will be disbursed through the Seafood Trade Relief Program funding via the Commodity Credit Corporation, administered by USDA’s Farm Service Agency. Eligible individuals or companies can apply for relief from 14 September to 14 December through their local USDA Service Center. The application can be found here.

The North Carolina Fisheries Association recently sent several pallets of seafood and bulk ice to Louisiana to assist in the relief efforts as a result of Hurricane Laura.

Member Doug Cross of Pamlico Packing in Grantsboro, NC called NCFA’s Executive Director Glenn Skinner and suggested NCFA get involved. Skinner agreed and said if Cross would take care of assembling the seafood, NCFA would take care of the logistics of getting it to Louisiana. Government Affairs Director Jerry Schill volunteered for that task.

Armistead Perry of Evans Seafood in Washington NC volunteered his facility for staging and Ross Butler of Wanchese Fish Co and True North Seafood offered the use of one of its refrigerated tractor trailers and driver to get the contents to its destination. They also supplied the pallets of bulk ice for the effort.

Charlie Hohorst of Acadiana Cold Storage in Lafayette, Louisiana offered the use of his location to accept and store the donations from North Carolina. The Gulf Seafood Foundation’s Helping Hands project will coordinate the deliveries to various locations.

True North’s driver, Lakeisha Williamson arrived at Evans on Sunday where the truck was loaded with the seafood and some cleaning supplies. The bulk ice was on the truck from Wanchese Fish Co. The truck arrived in Lafayette on Tuesday. The seafood and ice will be picked up by various relief sites to be used to feed storm victims and relief workers. The ice will be used for coolers to keep food cold for residents in the affected areas until power is restored.

Jim Gossen, Chairman of the Gulf Seafood Foundation’s Board of Directors, alongside the True North truck, wearing his groups “Helping Hands” gloves. 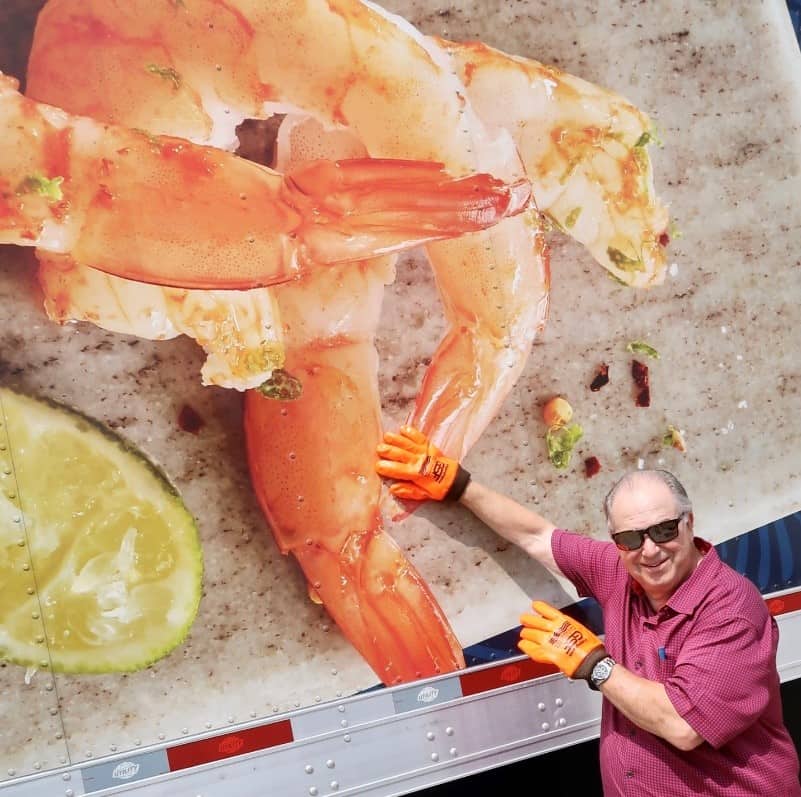