Lately it seems, CCA Executive Director David Sneed, cannot speak publicly without pointing out, and I quote, that “we (NC) are the only state that has an Incidental Take Permit (ITP) to allow the killing of endangered sea turtles in large mesh gill nets.”

Unfortunately, but not surprisingly, he seldom, if ever, provides any other background information on the issue, leaving anyone listening to assume that North Carolina’s commercial fishermen have been granted some special privilege to circumvent the Endangered Species Act (ESA), not afforded to other citizens of the state. As always, with the CCA and Mr. Sneed, there is a small grain of truth in their statement but what they’re not saying is far more important than what they are.

So, what isn’t the CCA telling you?

First, let me start by saying North Carolina does have a Sea Turtle ITP for the states anchored gill net fishery, that’s the grain of truth. The state also has a Sturgeon ITP for the anchored gill net fishery, but the CCA doesn’t mention that one because other states also have one and most importantly it’s not currently up for renewal like the Sea Turtle ITP.

What is an Incidental Take Permit (ITP)?

An ITP is a permit issued under section 10 of the United States Endangered Species Act (ESA) to private non-federal entities involved in otherwise lawful activities which are likely to incidentally, or accidentally, “take” an endangered species. Under the ESA a “take” is defined as to harass, harm, pursue, hunt, shoot, wound, kill, trap, capture or collect any threatened or endangered species. According to NOAA, “the Endangered Species Act requires that an incidental take permit be obtained for any “take” of an endangered or threatened species incidental to an otherwise lawful activity.”

Simply put, in order to comply with the ESA any individual, corporation, State Agency, etc. engaging in or permitting an otherwise lawful activity in which a “take” is reasonably certain to occur must obtain an ITP. That said, the only privilege offered to commercial fishermen through these state ITP’s is the opportunity to comply with Federal law, a privilege which is supposed to apply to all US citizens.

In fact, like commercial fishing, many other essential activities, in NC and across the country, require ITP’s including dredging and construction projects, power plants and wind farms, and state fisheries data collection programs, just to name a few. Of course, the “privilege” of legal compliance often feels like more of a burden than a benefit.

One requirement of an ITP is for the applicant to provide a conservation plan meant to minimize harm to the impacted species while still allowing the lawful activity being permitted to occur, at least to some degree. The conservation strategy for both the sea turtle and sturgeon ITP’s, requires gear restrictions, State observation of the gill net fishery, sets a minimum percentage of fishing trips that

have to be observed, and limits the number of acceptable takes for each species of sea turtle which occurs in NC waters.

State observers ride along with gillnetters while they work looking for interactions with endangered species and collecting fisheries data such as area fished, water depth, temperature, salinity, and dissolved oxygen, and catch data for targeted species and bycatch. Sea turtles and sturgeon witnessed by observers are extrapolated based on the percentage of observer coverage to estimate the total number of takes.

For instance, if 10% of gillnet trips were observed each turtle or sturgeon seen would count as 10 takes to account for unseen takes in the trips that were not observed. If these estimated takes approach the threshold of acceptable takes, the gillnet fishery is closed to avoid exceeding the limits set forth in the ITP.

I bet you’ve never heard that from Mr. Sneed!

You’ve also probably never heard that we have never even came close to exceeding our total number of allowed sea turtle takes or that most of the takes that do occur are released alive. That’s right, alive! A take is simply an interaction not necessarily a death as the CCA implies.

As I mentioned above the number of allowed takes is set for each individual species of sea turtle, meaning if the threshold is met for one species the resulting fishery closure prevents the remaining takes for all other species from being used. Simply put, there is no plausible scenario where we would meet, much less exceed, the total number of allowed takes in any given fishing year.

It doesn’t sound like the state has done us any great favors, Does it?

Of course, the state does knowingly allow some fisheries, both commercial and recreational, to occur without an ITP despite multiple years of documented takes of sea turtles. For example, the Wildlife Resources Commission Sea turtle stranding data has documented hundreds of takes in the hook and line fishery alone over the last decade. That’s right, no ITP and hundreds of illegal takes with no push for compliance with the Endangered Species Act. So, why have an ITP for gill nets but not hook and line fishing. Afterall, both are otherwise lawful activities where “takes” of endangered sea turtles are known to occur.

Aren’t the laws supposed to be applied evenly to all citizens not just a select few?

The truth is groups like the Coastal Conservation Association often weaponize the laws, pushing for regulation of those they view as competition, while dismissing the fact that they themselves are guilty of the same offense as those they seek to condemn.

The word hypocrite comes to mind. I guess they’ve never heard that old saying about people living in glass houses throwing stones. At least they’re consistent, the CCA’s strategy for protecting sea turtles is the same as their approach to managing fisheries. When discussing the impacts of commercial fishing they put on their “conservation” hat and preach the sins of “destructive fishing practices.” But when faced with similar impacts of recreational fishing the conservation hat comes off and the capitalist

hat goes on touting the economic value of recreational fishing over their negative biological and environmental impacts.

What other true “conservation” organization engages in and dismisses the same activity they condemn others for?

Can you name one?

If you said the North Carolina Wildlife Federation, I’ll give you that one, because on fisheries they’re no different than the CCA but I bet you can’t name another one.

While some hide behind the “conservation” label, true conservationist practice what they preach.

The CCA’s constant rhetoric about gillnets and sea turtles is nothing more than an attempt to pressure the state and Feds not to renew the sea turtle ITP which would effectively ban the anchored gill net fishery in NC. Their goal is obviously not to protect sea turtles but rather to reallocate those fish caught by commercial fishermen to themselves.

“In saying that this is an allocation fight, you are right!” 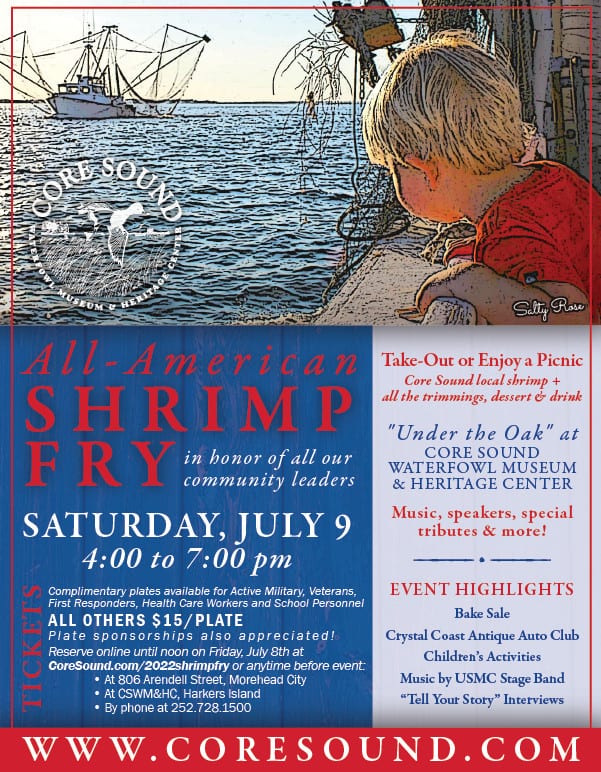