At the office of the Lower Neuse River Keeper, Katy Langley Hunt was answering the phone to respond

to yet another citizen report of a fish kill near Flanner’s Beach on the Neuse River. Almost simultaneously, technicians Jeremy Braddy and Amy Bartenfelder were motoring downstream in a 25 foot UNC-CH Parker research vessel from Union Point in New Bern to measure water quality conditions on the Neuse River. Tens of thousands of sea gulls told the story that Katy was hearing miles before Jeremy and Amy reached Flanners Beach. There was an active  fish kill and the birds were stuffing themselves with recently-dead and dying peanut sized (3 in.) menhaden. The morning of 27 October 2020 was off to an interesting start, and Jeremy and Amy went steadily to work measuring in situ water quality conditions and collecting samples for further analyses back at the laboratory.

On one end Jeremy connected a data cable to a hand-held computer and, on the other end, to a multi- parameter water quality instrument that measures dissolved oxygen, salinity, temperature, pH, turbidity, light, and the pigment chlorophyll a which is a proxy for the amount of algae in the water. Jeremy slowly lowered the high-tech instrument into the water while on the other side of the boat Amy measured water clarity using a 150 year old, but highly-effective device called a Secchi disk. The Secchi disk is basically a white pie plate on a string and the depth at which it disappears underwater gives an amazingly reproducible measure of water clarity. Amy’s shallow Secchi disk depth confirmed what Jeremy was seeing on the computer readout; the water was highly turbid and high levels of the pigment chlorophyll a indicated the presence of an algal bloom in addition to the fish kill. As Jeremy lowered the instrument deeper into the water column, the algae diminished to normal levels but the concentration of dissolved oxygen plummeted to zero. The “anoxic” waters beneath the fish kill could not sustain menhaden, crabs, or other animals.

In early fall, water temperatures are still quite warm and low oxygen conditions at depth is not unusual. The organic matter produced by algae slowly settles to the sediments where bacteria decompose the organic matter and, in the process, consume oxygen. In addition, the high freshwater runoff due to a very wet 2020 summer-fall season carries nutrients, sediments and “blackwater” organic matter derived from the watershed; microbial decomposition of organic matter and sediments further consumes oxygen, adding to the oxygen deficit. Unusually warm water temperatures accelerate the process of oxygen consumption, and combined with relatively calm winds during October, the conditions were right for very low oxygen conditions, termed hypoxia (stressfully low oxygen levels) and anoxia (no measurable oxygen levels).

Finding low dissolved oxygen in bottom waters below a fish kill, while stressful to finfish and shellfish, does not necessarily mean that this was the only culprit. Many of the fish had sores consistent with infection by the water mold, Aphanomyces invadans. This fish killing fungus grows exceptionally well when water temperatures are near 70 °F and salinity is less than 5 grams salt per liter, exactly the conditions observed in the region of the fish kill. Jeremy cast-netted a few dozen of the dying menhaden for analysis by collaborating scientists interested in determining the cause of fish kills. Back in the laboratory, water samples were processed to analyze the nutrient levels that fueled the algal bloom and Dr. Nathan Hall, Assistant Professor at UNC-IMS, grabbed a few drops of surface water for microscopic examination. The bloom forming species was not toxic which ruled out one potential cause of the fish kill.

The exact cause of the October 2020 fish kill is not known but fish kills in general are caused by a combination of factors including low dissolved oxygen, toxic algae, and opportunistic infections exacerbated by stressful water quality conditions. Mass mortalities of fish are one of the more obvious symptoms of ecosystem degradation that results from both human and natural causes. Increased nutrient and organic matter loading associated with rapid development upstream and in the coastal zone, increased frequency of storm events, warming, and sea level rise all threaten the health of our estuarine ecosystems. Other symptoms of declining ecosystem health include decreasing water clarity, increasing frequency of toxic algal blooms, and loss of submerged aquatic vegetation.

Our estuarine fisheries are vitally dependent on the overall health of the ecosystem, and ecosystem health starts with adequate water quality, which can be verified by timely and accurate monitoring. The ModMon program has been assessing water quality of the Neuse River Estuary and Pamlico Sound for 25 years. ModMon helped develop the state’s total maximum daily load (TMDL) program for nitrogen load reductions to reduce algal growth in the estuary. Subsequently, ModMon data have served as the “gold standard” for assessing progress in meeting the EPA-State mandated 30% nitrogen load reduction to the Neuse River, and have shown that reductions are still needed to meet that nitrogen reduction goal. Long-term monitoring programs like ModMon are rare and are precious assets for understanding how estuaries respond synergistically to combinations of changing land-use, supporting urbanization and agricultural expansion, nutrient  regulations, and climatological changes, including more frequent and intense rainfall and flooding events. Because of the rich data record, the Neuse River Estuary and Pamlico Sound serve as model systems for scientists and resource managers at the state, federal, and international levels.

Like the natural resources that it watches over, continuation of the ModMon program is also

threatened. In recent years, funding for ModMon has been provided by the State legislature but these funds have been cut due to budget shortfalls associated with the COVID-19 pandemic. Consequently, ModMon monitoring activities have been temporarily suspended while we seek future State and other funding. We hope to resume the program soon to maintain the regular flow of information on current conditions in the Neuse and Pamlico Sound and to minimize negative impacts of the growing data gap within the invaluable long-term record. You can help this cause by telling your state and federal representatives that you value the ModMon program’s role in protecting our estuarine fisheries habitats. 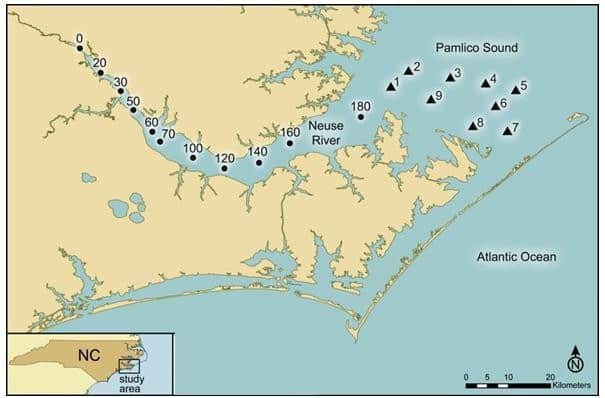 Led by UNC Chapel Hill’s Institute of Marine Sciences, the Neuse River Estuary Modeling and Monitoring program (ModMon) program has collaborated with the NC Depts. of Environmental Quality and Marine Fisheries, Weyerhauser Corporation, NC State and Duke University to monitor water quality and fisheries habitat conditions in the Neuse River Estuary and southwestern Pamlico Sound since 1997. Many of the water quality and habitat problems of these estuaries result from over-stimulation of algal growth due to increases in nutrient loading. With this in mind, a strong focus of the monitoring is on measuring the amounts and types of algae, the nutrients (e.g. forms of nitrogen and phosphorus as well as sediments and organic matter) that support their growth, and impacts of their over-growth (i.e. “blooms”) that create poor water clarity and low dissolved oxygen. The monitoring program consists of twice monthly sampling in the Neuse River Estuary at eleven permanent sampling stations and monthly sampling in Pamlico Sound at nine stations. 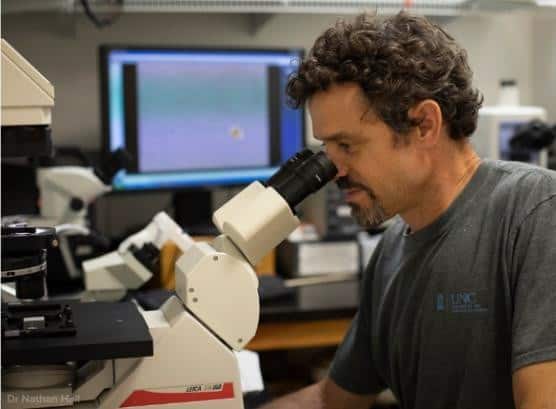 Dr. Nathan Hall microscopically examines water samples from the Neuse River Estuary for harmful algal species; this is an important component of ModMon monitoring to assess whether water quality supports healthy fisheries and to identify any potential risks for recreational uses. 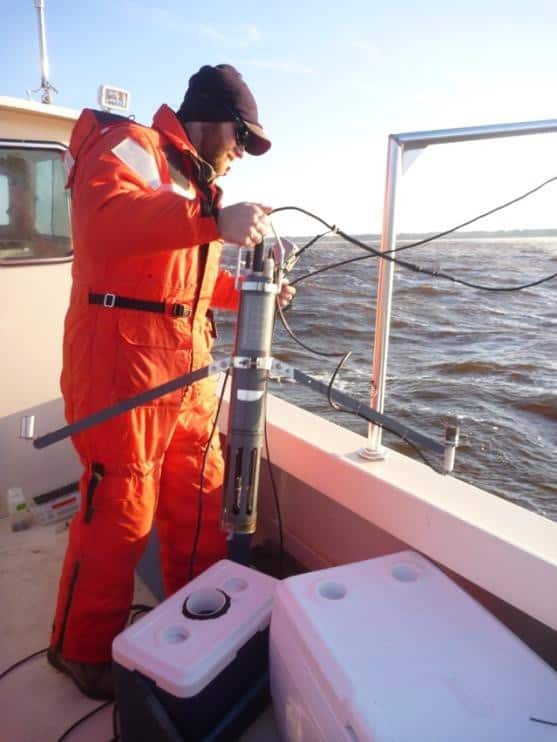 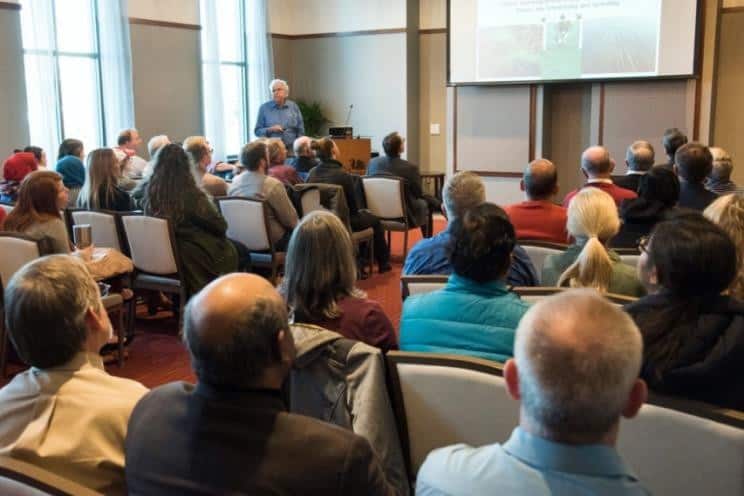 Dr. Hans Paerl discusses harmful algal bloom management on the Neuse River with environmental health and fisheries management staff as well as academics from North and South Carolina at an invited seminar at the University of South Carolina, November 2019.